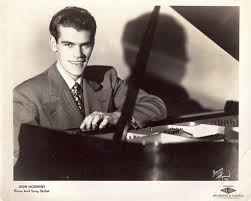 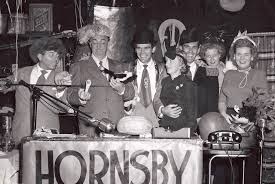 Did you ever hear of Don "Creesh" Hornsby?  His name would most likely have been as well known as Steve Allen, Jack Parr, Johnny Carson and Jay Leno if death hadn't overtaken the 26-year-old Long Beach comedian in May 1950.  Hornsby who lived in Long Beach with wife Dorothy, daughters Dawn and Dare, and son, Dave, started his showbiz career in 1948 at the Jack Lasley Cafe (Second Street at Santa Ana Avenue)  in Belmont Shore. Hornsby was a tremendously gifted concert pianist and composer and at the Belmont Shore cafe he combined his piano artistry with song parodies, magic tricks, unusual facial expressions and hilarious ad lib comic patter.  Sometimes he climbed into a rubber life raft suspended above his piano and tossed dry ice at the audience.  His performance was talked about throughout Southern California and people drove from all over the Southland to Long Beach to catch his act.  The screwball comic did a five-hour nonstop show without a break, eating his meals on stage while he reeled off a seemingly inexhaustible supply of gags.  Every 30 seconds he bellowed out "creesh" and if a lady customer appeared jittery as he swung over her head on a high trapeze, he would boom out "Don't get nervous. I know what I'm doing." Two minutes later he would have her on stage for a magic act where he would tie two scarves together and tuck them down her neckline.  He would then mutter "creesh...creesh" and pull the scarves and there, where the knot used to be was a brassier.  Hornsby said the theme of his comedy structure was "constructive escapism" which he called "creeshism." which meant that anything can be funny in the proper situation. 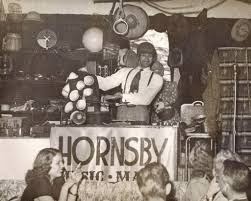 His success in Long Beach brought another comedian to his door, Bob Hope, who loved Hornsby's act and placed him on Hope's weekly radio show. Always on the lookout for new material, Hornsby made a tour of Europe in the summer of 1949, watching shows in Paris, Bern, Naples and other cities, and when he returned to Long Beach he revealed he was developing a new type of act that he hoped would carry him to New York. He had his chance to preview his new act in February 1950 when Hornsby appeared with Bob Hope, Doris Day, Les Brown, and several other well known stars at the Long Beach Municipal Auditorium in a live radio performance which was broadcast coast-to-coast. His radio and stage success caught the attention of NBC television executives in New York. Two weeks before his death NBC announced it had signed Hornsby to a five-year television contract to present a late-night show out of New York. Broadway Open House was network television's first late night comedy variety show.  It was televised live on NBC from May 29, 1950 to August 24, 1951, airing weeknights from 11 pm to midnight.  It went on to become the Tonight Show. Unfortunately Hornsby did not even get to perform one show...he died May 22, 1950. 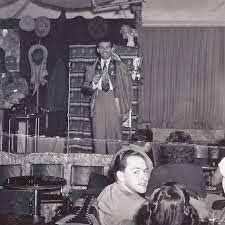 Infantile paralysis didn’t just strike the young, it could strike quickly AND it could be deadly, as Don Hornsby discovered.  Hornsby had worked long and hard to make a name for himself both on radio, stage and television, but as his star was rising he was stricken by polio and placed in an iron lung. Within a week after he was diagnosed with the disease he was dead.

The Tonight Show would become the longest running program on television creating stars overnight and making its hosts icons of the American television viewing audience. However, the fame and glory that should have been Don Hornsby’s was cut short by infantile paralysis.  Let us remember him here.

Posted by Claudine Burnett at 3:56 PM